The Lodge was consecrated in 1831 in Valletta, Malta.  This was not long after the end of the Napoleonic War at Waterloo.  It was then that Malta changed from French to British control.  Due to its fine harbour and strategic position, Malta became a base for the Royal Navy and the British Army.

There was also the establishment of a system of government, with the employment of many professional officers, particularly legally qualified men.  Amongst them were Freemasons, who established Lodges to provide the social activity which they had previously enjoyed in the United Kingdom.  Two of the heads of the legal system on the island were Waller Rodwell Wright and William Kingston.  The former is still remembered in the Lodge (No. 515) bearing his name, now meeting in Aldershot, and William Kingston is the name of the Royal Arch Chapter linked to the Union of Malta Lodge.

Many Servicemen passing through the area were passed and raised on behalf of their Lodges at home.  Some stayed and joined Lodges on the Island.  Many others were introduced to the Craft during their posting and were initiated, passed and raised, so forming a bond with their Mother Lodge outside of mainland Britain.

This applied to the Irish and Scottish Constitutions as well as the English, for although numerically smaller, with two Irish and one Scottish Lodges, they played an active part in the promotion of Freemasonry and, strong in amity, all three Constitutions often had common members.

This continued until the reduction of the British presence in the 1980s made the continued activity of all Lodges untenable.  There was a dedicated course of action to save them in an active environment by transferring to mainland England.

This process was very successful and only one Lodge returned its warrant to Grand Lodge.  The others were accepted into the Provinces of Hampshire and Isle of Wight (3), Hertfordshire (1) and Somerset (1).  One Lodge at the time (St. John and St. Paul) remained in Malta, together with its Royal Arch Chapter.  Also, the Rose Croix Chapter of the Ancient and Accepted Rite stayed.

Union of Malta Lodge No. 407 moved to Petersfield in 1981, and was accepted into the Province of Hampshire and Isle of Wight in 1983.  There are still a number of subscribing members who were initiated in Malta.

Fantastic night for the Union of Malta. The Brethren demonstrating their passion and support for the Lodge. Double third, candidate proposed, joining member and a future candidate interviewed. Happiness and joy for a growing lodge. @HantsMason @HantsMasonNE

Time for refreshment and a little dabble with the #2027Festival ale. Cheers Brethren of the @UnionOfMalta407 😍 double third complete, candidate proposed, joining member and candidate interview. Busy day for all. @HantsMasonNE @HantsMason pic.twitter.com/9s4K…

Exciting times for Brethren of Union of Malta Lodge No. 407 as we head towards our Christmas meeting. 2022 looks like an exciting year to come with number of prospective candidates and joining members! Peace, harmony and fellowship 😍😍 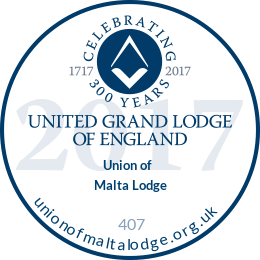 Are you interested in Freemasonry, please visit our membership site to find out more information at:

By using this site, you agree to our use of cookies More Info